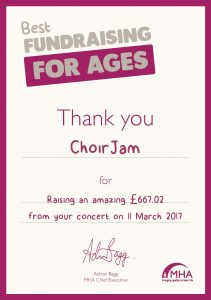 ChoirJam raised the roof and funds for the MHA’s Music Therapy Appeal at a concert on 11th March at St John’s Church in Keynsham.

The 80-strong ensemble, accompanied by their live band, performed a selection of pop tunes from across the decades.  They were joined by The Magnificent AK47 men’s choir from Wiltshire, known for their humorous approach with songs such as “Man Flu”.  The concert culminated in a joint finale with a rendition of Elbow’s ‘One Day Like This’, and it’s fair to say there wasn’t a dry eye in the house.

The concert  raised funds for the MHA’s Music Therapy Appeal that aims to raise £22,000 to provide pioneering music therapy to all residents who are living with dementia at its Horfield Lodge care home in Bristol.

Using Music Therapy, specially trained music therapists can regulate residents’ emotions to alleviate symptoms and identify their possible causes. Music Therapy is becoming increasingly important as it can modify a patient’s behaviour by significantly alleviating agitation and even reduce a patient’s reliance on drugs.

Zoe Steer, Community Fundraising Manager for the West said; “We’re delighted ChoirJam chose to support the Music Therapy Appeal at their concert.  Music Therapy has such a positive impact on the lives of our residents who are living with dementia and who have been able to benefit already from the service at Horfield Lodge. But we want more people to have access to this amazing service which is why raising this money is so important.” 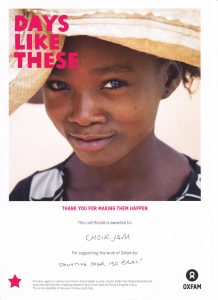 Well done Jammers for once again supporting(!) Oxfam’s Big Bra Hunt this year.  Yes, you dug out all your old bras that no longer fit, the ones you no longer wear and the ones that have got a bit…um..well.. baggy!  Not to mention some obviously questionable buying decisions, but don’t worry, all donations were anonymous!!

Over 150 of your bras are now winging their way over to Senegal to be sold in Frip Ethique, Oxfam’s social enterprise.  Most of the workers there are women who sort and sell clothes donated to Oxfam enabling them to earn a living with good job security, sickness benefits and a pension.  Over 500 local market traders buy stock from Frip Ethique and run their own businesses.  The profits are also invested in Oxfam’s work fighting poverty in Senegal.